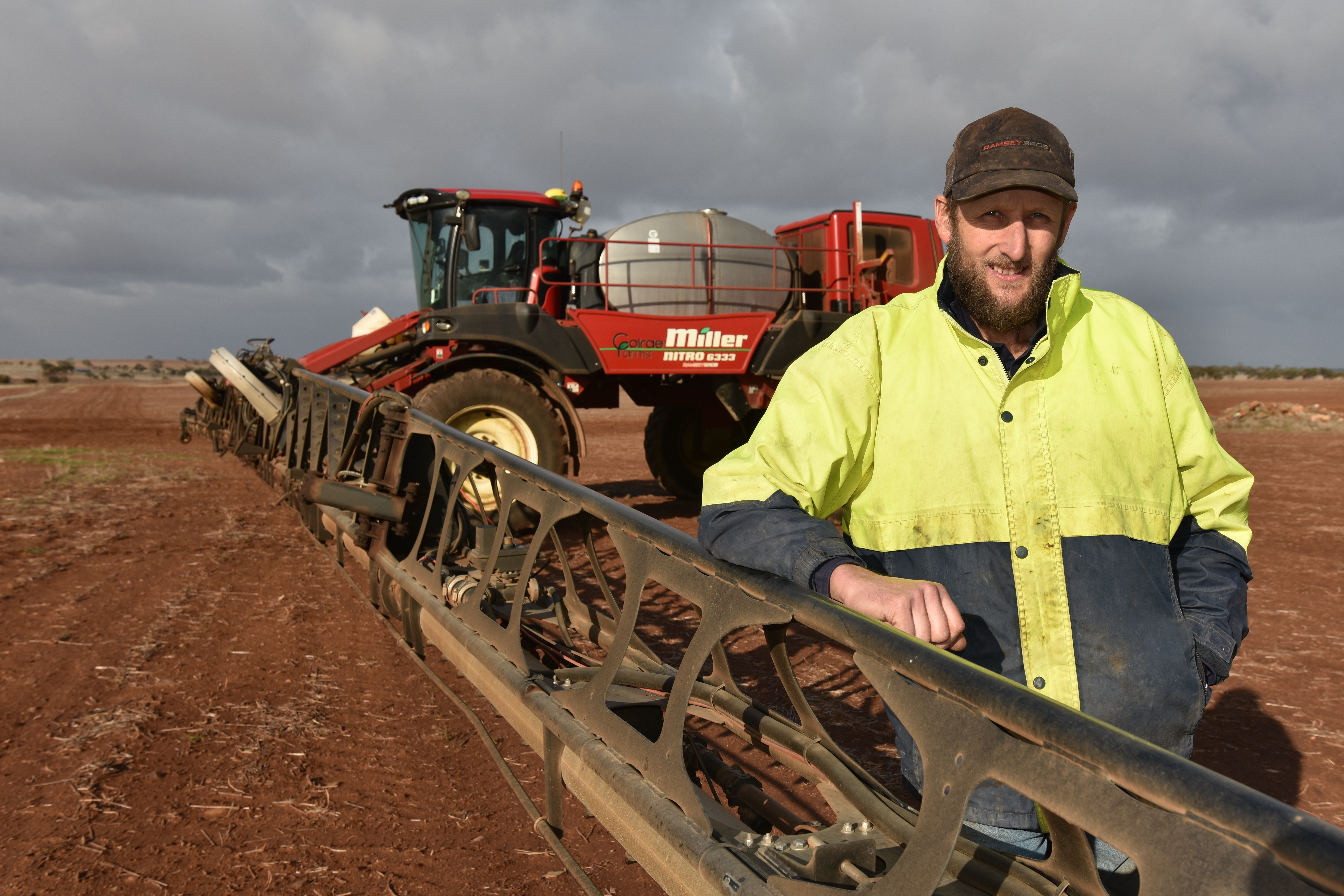 Nathan Wegener, Callington, says Miller Spray-Air technology has added multiple benefits to their spraying program, including the use of lower water rates. “We have equal or better coverage at 30L/ha than we did at 80L/ha. Plus there are a lot of savings on wetters and adjuvants as well. We can now get 150ha out of a tank and up to 200ha, which is a good day in this area, where we have smaller paddocks averaging 40ha,’’ Nathan says.


THE thought of applying crop sprays with water rates as low as 30 litres per hectare was not easy for Callington brothers Nathan and Brett Wegener to comprehend, however since making the move to air-assisted spraying they have not looked back.

Nathan and his wife, Jodie, together with Brett and his wife, Melissa, and their parents, Colin and Raelene, operate Colrae Farms, which also has built a reputation for its seed and fodder supplies to local businesses.

The family farms 2800 hectares including leased country, cropping about 2000ha and running a self-replacing Merino flock comprising about 2000 breeding ewes, some of which are crossed to terminal sires for prime lamb production.

They grow a range of crops in the 400-millimetre rainfall zone, including wheat, barley, oats, canola, field peas, faba beans and lupins, of which also assist the production of oaten, wheaten and pasture hay and pea and barley straw.

Ryegrass, enhanced by some resistance to FOPs herbicides, is the number one weed to manage on the property, while they also encounter some areas of wild radish.

Multiple summer sprays, knockdowns, fungicide and insecticide applications, plus desiccation means spraying is the dominant activity throughout the season and is the reason the Wegeners spent time over their last spraying system upgrade.

The move to air-assisted spraying with Miller’s Spray-Air technology came with an investment in a 6333 Nitro self-propelled sprayer from the manufacturer via Ramsey Bros at Murray Bridge, upgrading from a Hardi tow-behind sprayer pulled by a John Deere 7200R tractor that has been retained.

Brett said considering their spray tank size reduced from 8500L to 6100L with the Miller Nitro, they liked the idea of using low water rates, however they were a little amazed to hear they could apply just 30L/ha of water when they had traditionally used up to 100L/ha and the general industry catchcry was “water is king’’.

“The first time we sprayed grasses we thought we couldn’t cut it that much and so went with 50L/ha, but we now use 35L/ha,’’ Brett said.

“Brown-out is good with the higher herbicide concentration at the lower water rate. Years ago we used to wait two weeks for brown-out.’’

Nathan said for summer spraying they get down to water rates of 30L/ha.

“We have equal or better coverage at 30L/ha than we did at 80L/ha. Plus there are a lot of savings on wetters and adjuvants as well,’’ Nathan said.

Water rates of 80L/ha have been maintained with pre-emergent herbicide applications.

“If you do two tanks, it’s a big day and you can get caught. If you have lunch and then get back out there, it can be a battle to finish the spraying.’’

He said the Spray-Air also was excellent for targeting disease in faba bean and field pea canopies.

“Our agronomist said you could see the fungicide getting down into the crop, whereas with the other sprayer it would just float on the crop.’’

“It also helped to get chemical down on to the ryegrass when desiccating canola.

“You can adjust the speed of the air to suit different crops, weather conditions and according to the weeds. You can also manage drift by winding back the airflow,’’ Nathan said. 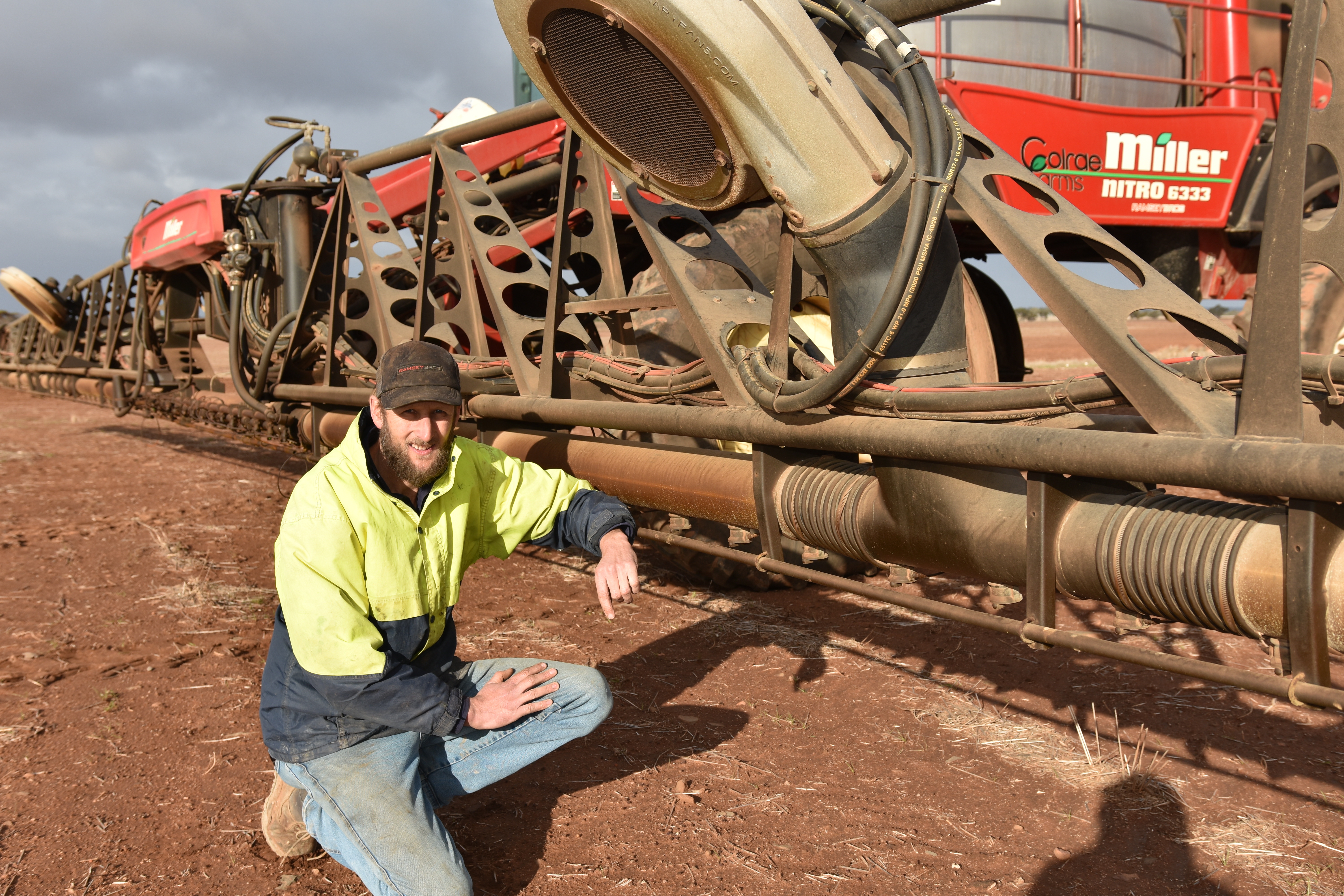 The Miller Spray-Air system uses air-assist and air-atomisation technology, forming one powerful spray nozzle system. Operators have fingertip control of the droplet size and speed of the air delivery for any spraying application. They can consistently atomise spray droplets in a range from 200-500 millilitres per minute per nozzle – spaced 25 centimetres apart.

The Wegeners also have a second spray line on the 36-metre boom fitted with IDK low-drift nozzles that is particularly used to apply the pre-emergent herbicides.

Nathan said they liked the simplicity of the 6333 Miller Nitro and its fuel economy, and the manufacturer’s renowned front-mounted boom provided for excellent manoeuvrability, including into corners and between trees, and helped to prevent a “crook neck’’.

They also lauded the Miller sprayer’s stability and ride over their rough country, where they spray at speeds of 18-20 kilometres per hour.

“It felt like we were flying in the trailing sprayer at that speed. The Miller rides beautifully and is so quiet – you have to open the door to check the engine is running,’’ Nathan said.

“With the trailing sprayer, you were stuffed and mentally exhausted at the end of the day. I used to end up at the ‘chiro’ every year from spraying and haymaking – now it’s only from haymaking

“Now with the Miller sprayer, with section control, auto-height and auto-steer, it’s not mentally draining. And it’s so critical, because it’s the most used machine on the farm.’’

He said the option of a windrower on the front of the Miller and spraying under the cutterbar was another bonus.

“We windrow barley, canola and some oats and spray under the cutterbar. There was an issue with regrowth last year, but we had no problems with spraying under the cutterbar and got a really good kill to help keep the weed numbers down.’’