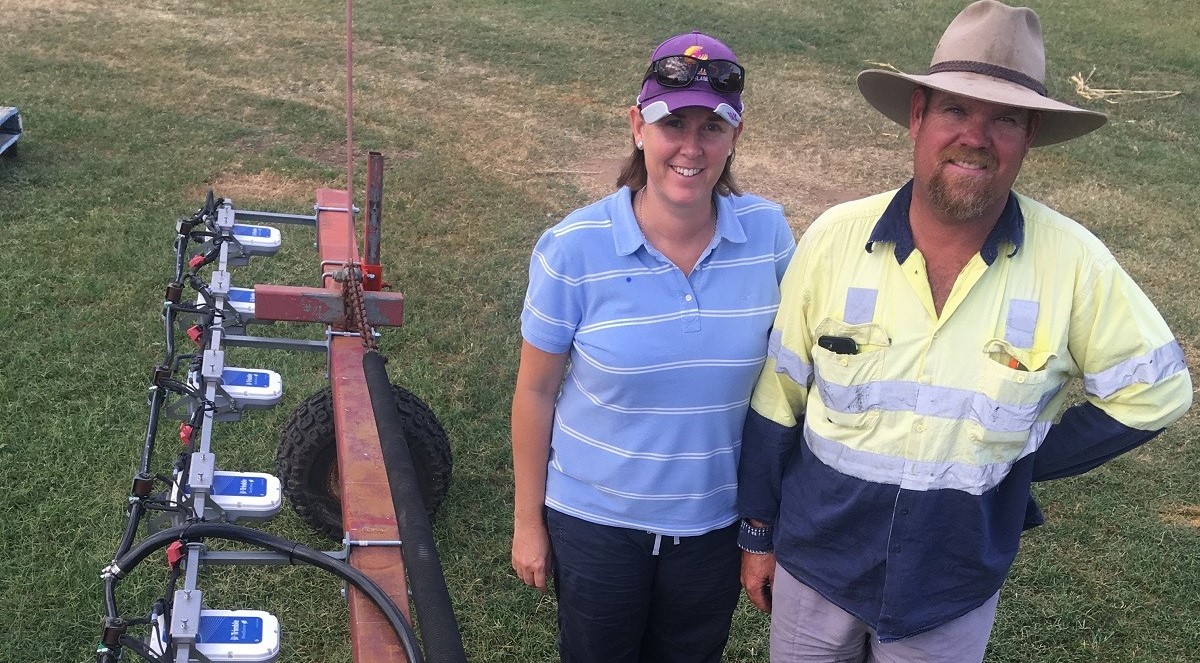 Darling Downs farmers Tabitha and Shane Peters with the new WeedSeeker 2 spot spraying system installed on their older, three-point linkage, 24-metre Hardi boomspray at their ‘Ackmer’ property between Toowoomba and Warwick in Queensland.

Feathertop Rhodes grass can become a problem very quickly and the most effective herbicides to control it require significant investment. The Peters family on the Darling Downs found a solution.

Shane and his wife, Tabitha, together with their children, William (10), Thomas (7) and Katelyn (6), farm 670 hectares of mainly black soils between Toowoomba and Warwick in Queensland, including their ‘Ackmer’ property as well as leased and share-farmed land.

Over 460ha, they grow predominantly summer crops of corn and sorghum, although recent drier seasons have impacted the corn production area. Winter crops include mainly barley and some wheat and chickpeas. The remaining grass country accommodates Droughtmaster breeders running with Angus bulls.

“If you don’t get on to it quick, it gets up and is a huge problem,’’ Shane said.

He said FTR through the area was resistant to glyphosate and other effective herbicides against the weed can cost $100/ha.

“You couldn’t do a blanket spray with the other products. You would have to look at other strategies like cultivation.’’

This prompted Shane to invest in the new WeedSeeker 2 spot spraying system from Trimble last year, purchased through Anthony Morgan at the Dalby branch of McIntosh & Son.

“After a decent rain to get a good flush of weeds, we do a blanket spray of Roundup, but the feathertop laughs at it, so we now come back after four weeks, and again later if necessary, with the WeedSeeker to clean it up,’’ Shane said.

He said it was his first foray into the technology and he was targeting the chemical savings achieved by spot spraying.

“We did some sums and think it will pay for itself pretty quickly – maybe in four years.’’

“We’ve done the whole farm twice and the feathertop was only about 4 per cent, and the second time we sprayed about 10pc.’’

Shane first viewed the WeedSeeker 2 at AgQuip field days at Gunnedah and liked the look and layout of the system.

At Anthony’s invitation, he later attended a demonstration of the system at Narrabri in New South Wales held by national distributor, McIntosh Distribution. 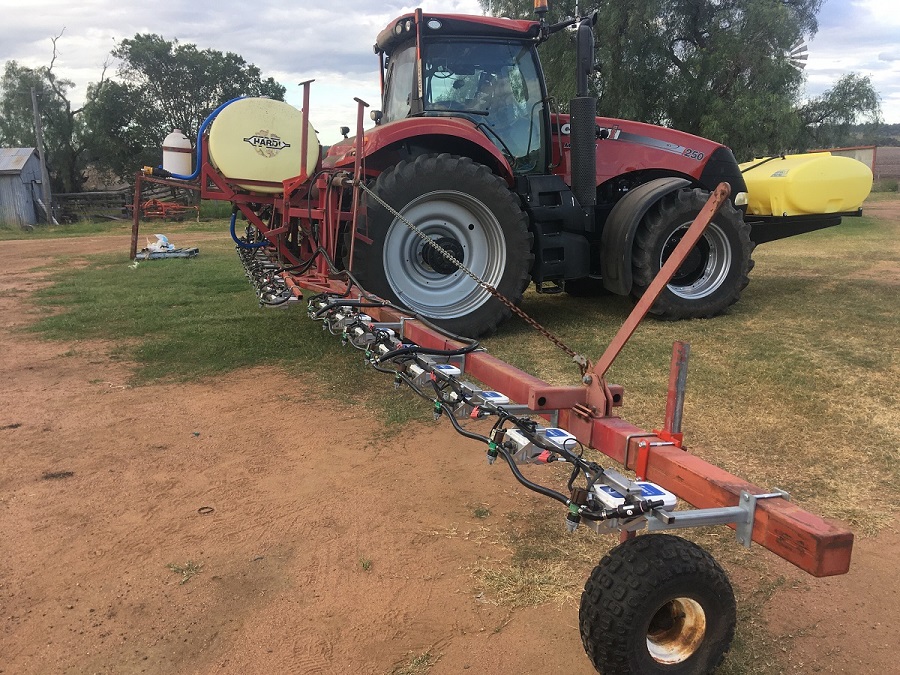 The Peters’ WeedSeeker 2 system was installed on an older, three-point linkage, 24-metre Hardi boomspray that was sitting idle on the farm, but which is now set up permanently for the spot spraying applications.

The WeedSeeker 2 sensors were installed over two planter widths (15m) to suit the family’s tramline farming system, however Shane said he would be keen to extend it to three planter widths. They use a 7.2m planter on 2.4m wheel centres.

Shane said the ability to immediately “plug and play’’ with the system through the existing ISO display due to its ISOBUS compatibility was a great benefit with the WeedSeeker 2.

He said the sensors were light and simple and could operate at variable boom height, which was a bonus in their undulating country.

The WeedSeeker 2 sensors are 50pc lighter than their predecessor, helping to reduce the overall weight of the system on spray booms, while their spacing along booms has widened from 38 centimetres to 50cm, effectively reducing sensor numbers by 30pc. The lighter sensors also allow the system to be used on wider platforms.

Compared with other similar products that have sensors spaced at every metre along booms, the 50cm spacing provides for double the resolution when targeting weeds, which is especially valuable in situations with heavy stubble burdens.

Shane said the automatic calibration with the intelligent, self-learning WeedSeeker 2 sensors was a major benefit, constantly adjusting to the environment they work in.

“They are recalibrating all the time. You can have a header track or a blocked row and it will recalibrate that one spot.’’

Section control and turn compensation are other popular features and, in addition to typical rate control and steering functions, the system also provides weed mapping, which pinpoints where and when weeds are treated in paddocks.

“I have been keeping the weed mapping in the back of my mind and thinking about applying pre-emergent (herbicides) in the problem weed areas,’’ Shane said.

Growers interested in further information or viewing a demonstration of the WeedSeeker 2 spot spraying system can contact your local McIntosh & Son Dealership.