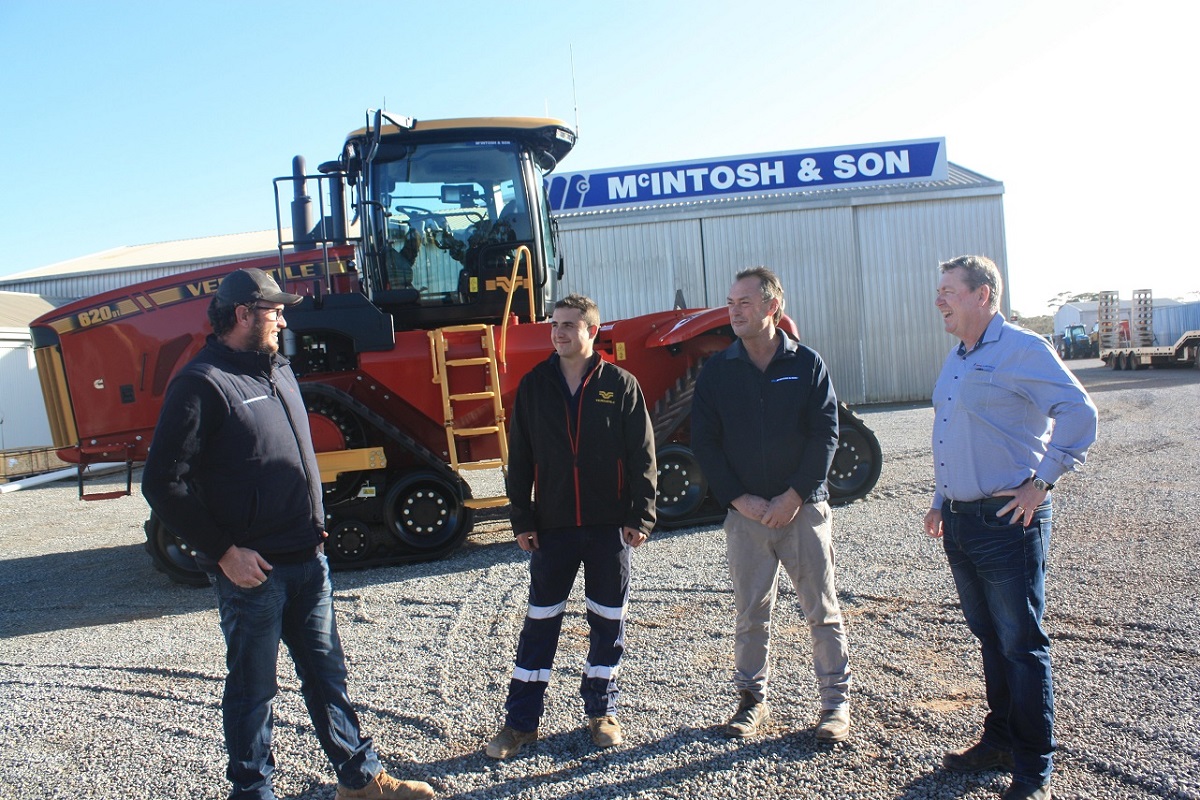 After a solid demonstration program with this Versatile 620 Delta Track model, it’s time for follow-up by McIntosh & Son sales staff. PFG Australia WA manager Dave Rogers (right) tells Merredin branch manager Rob Pauly, service manager Jay Constantini and salesman Corey Harken that stock will be on its way by November. “It would be prudent to talk to McIntosh & Son over the next few weeks to secure a model for 2021” Mr rogers said.

VERSIES are back. Though arguably you would be right to say they never went away..

It’s just that over the past three years, there has been more farmers wanting to give the new Versatile DeltaTrack tractor a closer inspection.

PFG Australia WA manager puts in it down to two things - an association with machinery dealers McIntosh & Son, and soil melioration work involving heavy machines working to depths between 500 millimetres and 700mm (and sometimes deeper).

“Owners tell me they are the best deep ripping tractor on the market,” he said. “The 620DT puts the power to the ground while using less fuel than competitive brands,” he said.

“We’re definitely seeing sales trending upwards and a lot of that has to do with the demonstrations held by our sole dealers, McIntosh & Son.

“It has led to news getting out about the performance and fuel savings and a lot of guys looking over the fence checking out our owners.

“But it’s true the Versatile name went quiet for a while and was certainly not the household name they were in WA 40 years ago.

“I think that’s changing quickly now as the sons whose fathers owned Versatile tractors back then realise nothing has changed in terms of their simplicity, power to the ground and reliability.”

Old Versie owners would certainly get a kick out of how the machine has evolved sitting in the cab of the DT.

For many, the Versatile story is an interesting one.

Versatile, a Canadian company, was the first to mass-produce articulated four-wheel-drive tractors, starting in 1966 with the D100 and G100 four-wheel drives.

The early models were primitive by modern standards, with a six-cylinder diesel or eight-cylinder gas engine producing 75 kiloWatts (100 horsepower) and a selling price of $10,000.

Founder Daniel Pakosh also developed the first bi-directional tractor in the world - the Versatile 150, which was launched in 1977.

The company painted the tractors red, yellow, and black and they were also known for their flat, boxy appearance.

At one stage in the late 1970s, Versatile built a 448kW (600hp) model named “Big Roy” after fellow founder Roy Robinson. It was, at the time, the world’s largest horsepower tractor.

But its commercial models stretched to 350kW (470hp) in its then flagship 1150 tractor.

The decals were replaced with the Ford name and Versatile name was reduced in size and placed below the model number.

Additionally, the iconic Versatile colours were replaced with the Ford blue and white.

Throughout Versatile's time under Ford-New Holland, various changes and updates were made to the line.

Two of the most notable changes were the transition from the flat square sheet metal, to a more modern curved design, with the addition of a powershift transmission.

In 1991, Fiat Geotech purchased Ford New Holland to create New Holland, which then merged with Case Corporation in 1999 to create CNHi Global.

As part of this merger Versatile had to be sold, as the Case Corporation had distributed the Steiger brand since 1986.

Versatile was sold to Canadian manufacturer Buhler Industries Incorporated, and they changed the tractor colours to red, yellow and white.

In 2007, Russian combine harvester manufacturer Rostselmash Inc. acquired 80 per cent of the common shares of Versatile and decided to retain the Versatile brand name as the sole name associated with the tractor division.

In 2016, Versatile expanded its tractor range by adding the DeltaTrack system of four tracks on their articulated tractors, and a year later returned to painting the tractors in their original colour scheme of red, yellow, and black.

Follow McIntosh & Son on social media or chat to your McIntosh & Son Dealership. to find out when and where you can see the Versatile DeltaTrack in action.