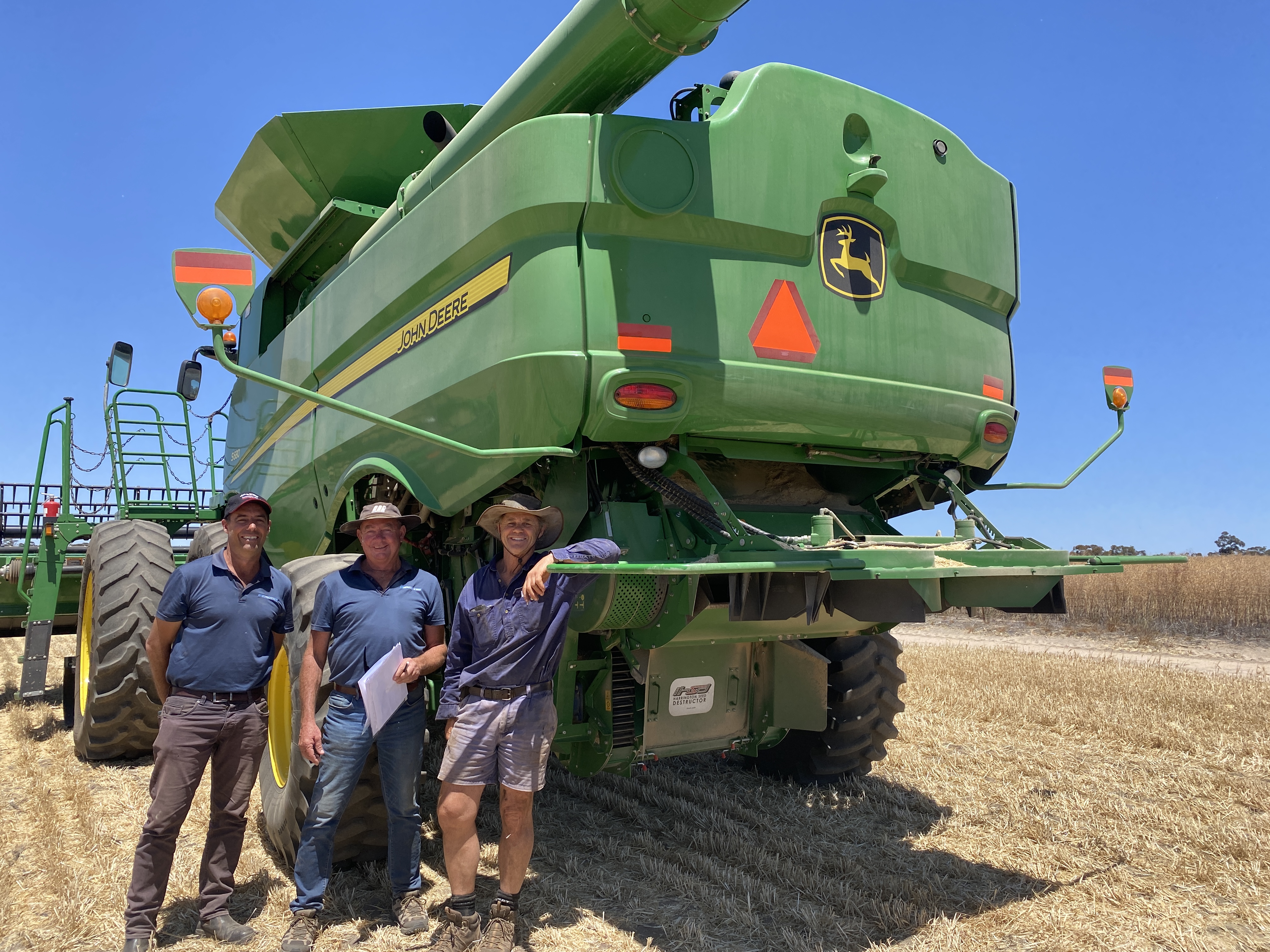 DESTROYING weed seeds via their harvesters was always going to be a natural progression for the Boultbee family near York – they were just waiting for the latest integrated weed seed control systems and technology to mature.

The Boultbees have been practicing harvest weed seed control since the turn of the century, using chaff decks and chaff carts in more recent years to mainly target annual ryegrass and wild radish weed seeds.

Andrew and Marjorie Boultbee have been continuously cropping areas of their home property and leased land in the Avon region since the late 70s and early 80s.

The cropping program generally follows canola-wheat-wheat or canola-barley-barley rotations, as well as growing hay, on soils ranging from loams to lighter land and some tamma country. Their three children, including Bryoni, Ben and Kate, were recently home from university to help with the last harvest.

The family also runs about 3000 Merino and crossbred sheep confined to grazing areas.

Andrew said they ran into herbicide-tolerant weed populations many years ago and so were early adopters of harvest weed seed control to ensure weed pressures did not dictate cropping rotations, as well as to achieve good weed control on the leased land.

“We haven’t burned on a broad scale for 20 years, so that took one of the weed control tools away. We started with chaff carts and then put weed seeds in tramlines with the chaff decks, but we were always heading toward destroying weed seeds. We were just waiting for the Seed Destructor to become vertical and reliable,’’ Andrew said.

The family had the new vertical, mechanical Harrington Seed Destructor (iHSD) installed on each of their two John Deere S680 headers by McIntosh & Son at Wongan Hills prior to last harvest.

Invented by Western Australian grower Ray Harrington and independently shown to kill up to 99 per cent of weed seeds, the Seed Destructor is designed and manufactured by de Bruin Engineering and distributed nationally by McIntosh Distribution. The core mill technology was developed by UniSA with funding and support from GRDC.

The system can be fitted to later model John Deere, Case IH, New Holland and Claas harvesters, with no permanent modifications required, and is designed to operate at 3000 RPM to maximise mill capacity.

“We looked at everything and we saw the Seed Destructor as a more reliable system,’’ Andrew said.

“With the vertical Seed Destructor, you have a bit of a sump (stone trap), so you have got a sporting chance to catch it.

“Some of the rubbish you find in the sump of the Seed Destructor, you wouldn’t want it going through the mill – and it’s not just metal, because you can pick up a nasty rock. We are used to having the fronts on the ground, at beer can height or less, and travel at 8-8.5 kilometres per hour maximum.’’

The Boultbees used power chips in the John Deere harvesters and had no problems maintaining header capacities.

They were also able to check grain losses when required and were pleased with the wearability of the Seed Destructor mills after about 550 harvest hours.

“We thought we would be lucky to get through the season, because we are so low to the ground and taking in more dirt than some, but they are ok.’’

He said machine support during the harvest from McIntosh & Son had been great and they would look to streamline a couple of aspects of the Destructors for next season.

“It was very nice not having chaff heaps to deal with or it sitting in rows from the chaff decks.’’

“Chaff carts were good at the time, but that has gone now and this is easier to manage. There’s a bit of nutrition that comes out the back of the old header and we prefer to have the material back on the paddock.’’

Andrew said once the harvest weed seed control “lever’’ was pulled for weed control, it was also important to be employing all other weed management strategies because there were few “bullets’’ remaining.

The Boultbees croptop all their canola and, similar to the benefits gained from their hay program, they swath barley to capture any weeds that may shed or lodge early.

“Before that, we were just selecting for ‘lodgers’ and ‘shedders’. We weren’t going to get those,’’ Andrew said.

“Research has suggested weeds lose about 1pc of seed a day from a certain point, so if it takes 40 days to get to a crop and there’s already been a bit of wind, that’s a fair bit of harvesting of weed seeds by nature.’’

Despite possibly sacrificing some yield, thicker and taller crop varieties with greater vigour are grown to help limit weed tillers at harvest.

At seeding, an east-west orientation is followed to provide a shading effect in the interrow, further discouraging weeds, and the family applies herbicides immediately after hay is carted from paddocks.

Crops are also sown into the previous year’s interrow for more even soil throw and incorporation of pre-emergent herbicides.

“Closer to the furrow, you get lumpy soil throw and the root system is uneven. In the interrow, the soil is smooth and you can lay the chemical down evenly with the boomspray.’’

Meanwhile, growers can now take advantage of an early order program announced on the Harrington Seed Destructors to upgrade their harvesters with the machines and effectively beat price rises during 2021.