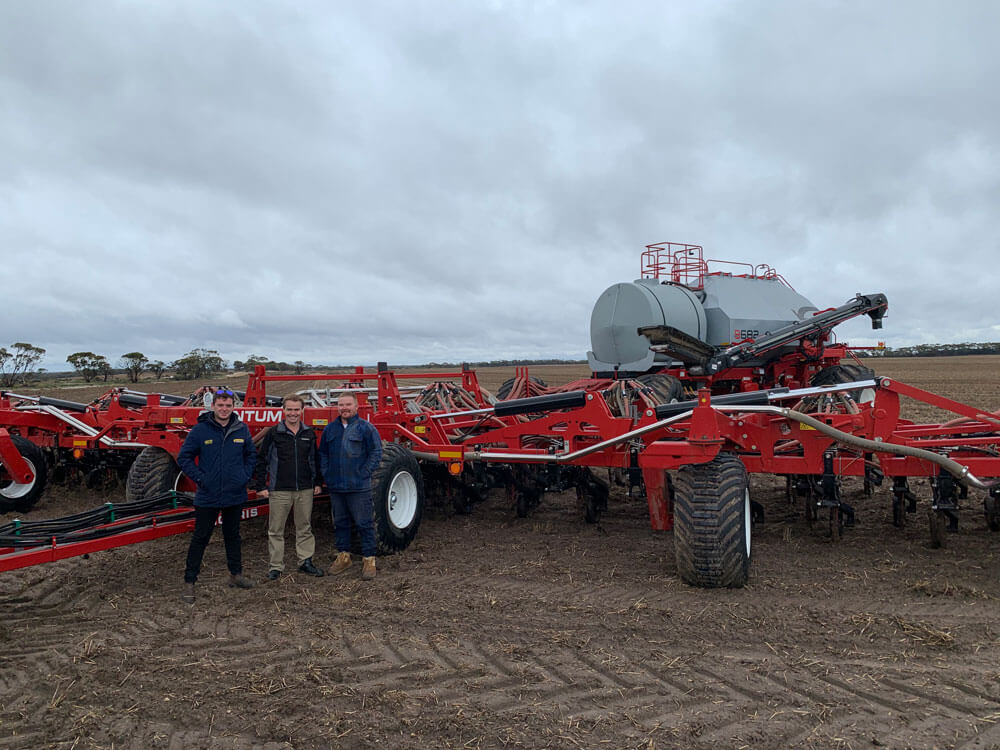 INVESTING in a new seeding rig is one of the biggest decisions for any cropping operation, ensuring it suits your farming system and conditions, and also offers the technology advancements to deliver your next jump in productivity.

Near Salmon Gums in Western Australia’s south-eastern agricultural region, the Nolan family was getting nervous about the resilience of their old John Deere 1820 air drill and so knew an upgrade was due.

For several years they contemplated, made their decision and then changed their minds – many times. The pendulum mainly swung between another John Deere, a Morris Quantum air drill and an Ausplow DBS bar.

The Nolans have recently completed their second seeding program with the rig and, albeit under favourable sowing conditions on both occasions, are once again very impressed with the crop germinations over much of their property, with a few exceptions in some non-wetting sand. They are also pleased with the seed and fertiliser savings from the section control.

“Last year the germinations were excellent. It was one of our best strike rates with canola,’’ Lloyd Nolan said.

“This year, again the germinations are really good – the establishment mostly looks great, other than some canola in some problem soil. The wheat came up amazingly fast, which I think was also because the ground was still warm.

“Last year we also worked out we probably saved 400 hectares of overlap (sowing).’’

Lloyd and his wife Tegan, who have a three-year-old son, Harrison, farm with Lloyd’s parents, Wayne and Judy, at the family’s ‘Cargarie Farms’ properties. They crop 7400ha over several blocks in the Salmon Gums area to wheat, barley, canola and field peas. Their northern property comprises heavy country, while the home farm features sandy loam over clay and areas of sand.

Lloyd said they also initially had some nerves about the 18-metre (60-foot) Morris Quantum air drill around strength and longevity, but were happy after having a good look over it and had since encountered no major problems.

“When they upgraded to the new openers and cast arms, the bar looked a lot better and stronger. We liked the look of the tyres for getting much better flotation and seed placement on very soft, delved country and deep sand,’’ he said.

“It’s a clean looking bar with the layout and has great strength through the frame, and the narrow transport width is good. We normally dry seed quite a lot and the strength will be important when it’s dry.’’

Lloyd said there had been a couple of teething issues, but they were attended to with the backup support for the system through local Morris dealer, Staines Esperance.

The Nolans have adopted a controlled traffic farming system, albeit it is not quite 100 per cent tramlining due to a couple of larger-framed machines, while real-time kinematic (RTK) guidance on their Topcon X35 controller assists them to drill back into previous furrows. 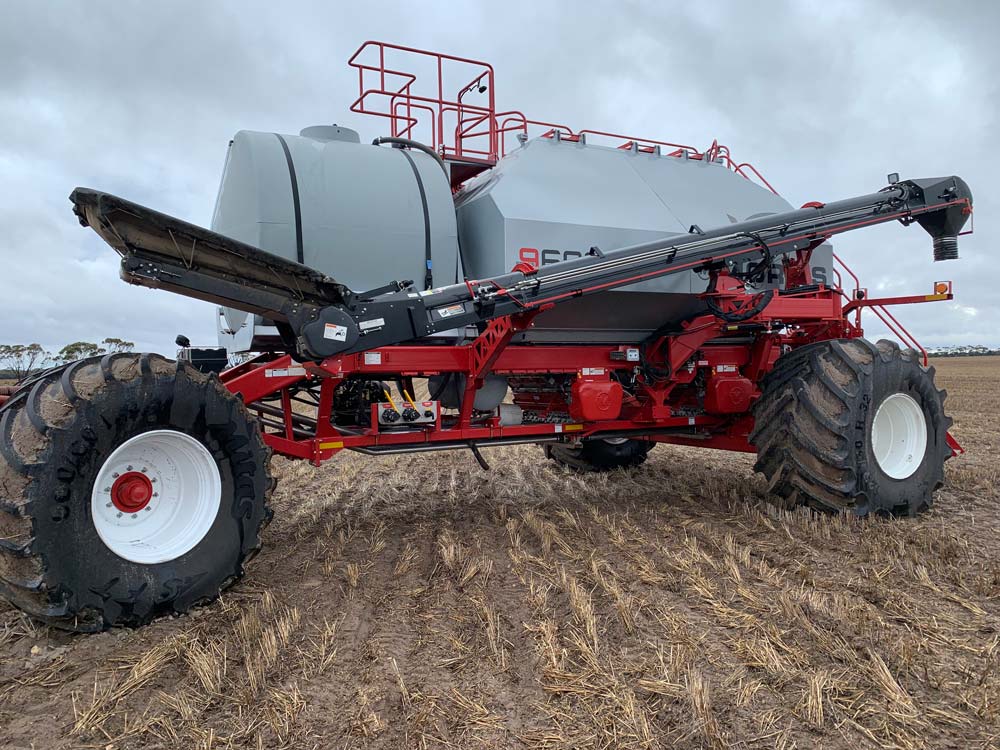 The move to a new air drill also prompted a tine spacing change from 25 centimetres (10 inches) to 30cm (12in) and a switch from a single boot arrangement to a paired-row system for seed delivery, which Lloyd said they were reviewing, but had not yet made a decision on whether an alternative arrangement would better suit their needs.

Compound fertiliser is sown separately underneath the seed and Flexi-N liquid nitrogen fertiliser is placed deeper in the soil profile.

Product is delivered via Australian manufactured, stainless steel upright air kits, which Lloyd said were a snug fit but good, while their Quantum air drill also featured Auto-Lift for automatic lowering and lifting of tines linked with the ICT, as well as integrated Morris blockage monitoring that was now “section aware’’. It is aware when sections are turned-off due to overlap, thereby avoiding false alarms.

“It knows if it goes over the outside, even with canola. Blockages we’ve had in the past are just annoying and this system has sensors on every seed hose and one on every head for fertiliser and it has worked well – it’s peace of mind,’’ Lloyd said.

“Everything goes through the Topcon X35 that we run the seeder through and it’s going well. It’s good to have it all on the one screen.’’

He said they also could take advantage of automatic end-of-row turning for perfect teardrop turns through their existing John Deere guidance screen, which works in conjunction with the X35. Combined with Auto-Lift, automatic end-of-row turning provides for correct tine lowering at the start of new run lines, which can relieve pressure on drawbars, articulation points on tractors, tines and tine bushings.

Lloyd said they liked to have good vision of the air drill, so they opted for a tow-behind Morris 9682 air cart, which incorporates a 11,400-litre tank, 12,000L tank and 7000L liquid fertiliser tank.

He said they were initially targeting a full 12-hour shift with the larger capacity air cart, however they still had to fill-up the liquid tank during shifts.

Accurate and even liquid distribution is managed by the fully integrated GEN 5 Liquid Systems console, thanks to the partnership between national Morris distributor, McIntosh Distribution, and Liquid Systems.

He said significant areas of lake country were a strong driver for the section control technology, which they also turned-off when completing headlands.

Variable rate control is expected to be adopted in future to help achieve further savings.

Lloyd said while they had to learn the functionality of a new screen by using the Topcon X35, the metering and all system operations had been “spot-on’’.

They also were happy with their decision to use a conveyor, rather than a traditional auger, for filling the cart.

“It is a lot quieter and faster and has worked really well,’’ Lloyd said.

He said the only item he could think of with the cart to possibly add would be weigh cells.

“It would help to know exactly what you have got on-board and where you are in accordance with your rates of application,’’ Lloyd said.